Ulverston / Whitby: After The Event 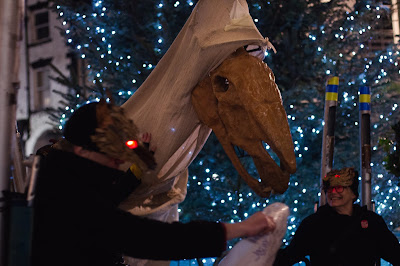 2 rainy nights, roughly a month apart, at opposite edges of the country; one in Whitby , one in Ulverston.
Crowds have gathered despite the rain; in Ulverston they are here to see the Oss and associated effigies , hear the Harmonica and the Human organs pipe band, and the ostler's bewildered proclamation.. 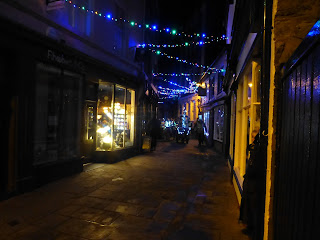 In Whitby a couple of hundred are mustered to march. I was there; it may go down the harbour side I thought, above the Penny Hedge, providing a juxtaposition of dancing illuminated willow and drowned, unseen hazel staves.
By 6 It didnt look promising; I watched the wind pull on the bin-bag surface  of the harbour water from the dining room of the Jolly Sailors, (Sam Smiths. No mobiles, no screens, no swearing please) ate and went back to the digs to get a coat , returning just in time to miss the parade as it crossed the bridge.
And then back up Grape Lane it came,  a fleet of tissue and withy lifeboats cresting the shoulders of the kids that made them; pyramids, an abundance of hi-viz, we watched them cross over the bridge and around the old Nat West and back to the square where the plan was to switch  on the Christmas lights. 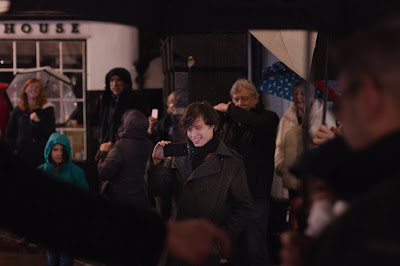 These are young events,  taking root, growing slowly, acquiring some trappings and jettisoning others , feeling their way to the familiarity and consistency that sits at the heart of tradition. 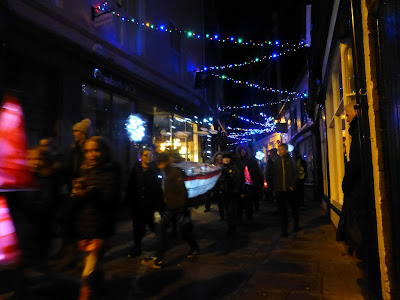 All ritual and ceremony does this, but it takes time (3 iterations  according to my friend the storyteller Ian Douglas) and the thing you can't  graft onto any new attempt at establishing tradition is the dynamic of tradition itself ; the gradual assumption of a format or a protocol or the moment on the way to that point where (say)the church co-opts it, or where the secular reasserts itself; or where the founders -village lads, bored with  mushrooms and horse skulls -walk away and other, sober, hands take it on.
The work is done over decades;  each slow procession through the streets is a footstep in an incremental procession through time,
the prism through which tradition is viewed.


Ritual or ceremony  requires  a witness rather than an audience. 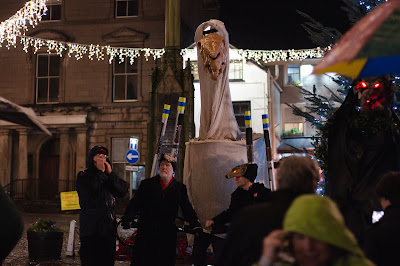 But the border between ceremony and performance  blurs over time. Events become public property. The Whitby Horngarth is a good example;  until recently  memory (and memory of memory) was still the sole repository of centuries of activity on the north wall of the harbour.  The Horngarth -the event itself - was annually  reconstructed from the knowledge of those who delivered it. Now, photographs and moving image provide a reference point. With  younger events,evidence is  put into service as an accelerated equivalent to the accumulated layers of experience, protocol and lore  that are characteristic of established practices.
Get it wrong and your event becomes schlock; the product of other products,  contrived primarily for the purpose of being recording. The balance tilts further towards performance, before the last notes have faded the documentation and re-shaping of the experience of those present has begun. 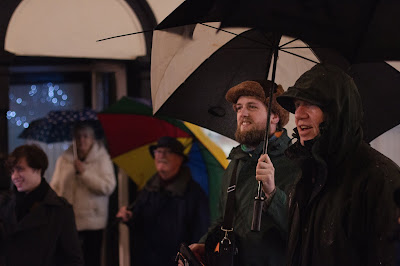 Fast cuts, filters applied to footage,  lo-performance recording devices can transfer a moment to a desired space between the past and the present, cladding it in the characteristics of other remembered media events and archive material  that inspired it. 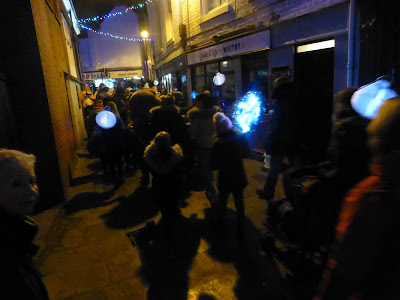 These  are part of a process of circumvention by which the document becomes the product, where attendance and participation are less important than the archived presence of an edited version of the event. 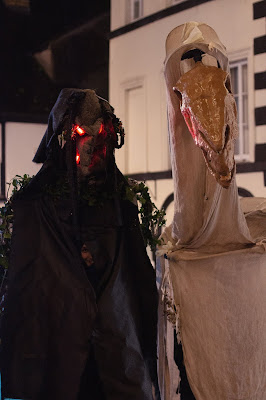 The cladding of the present in the grain and textures of earlier times betrays an impatience to line up alongside perceived ancestors and classic texts. To achieve the trappings of longevity without the need to endure. To be authenticated by association with the past. It betrays a neurosis; that without foregrounding these associations the Work -In-the -Moment can't be validated.

Truth To Materials extends to the way we record things. In that Moment...there is no filter at work, no 2-D glasses to wear. Documentation can reflect this; the best of these images capture the undeniable rough edges that still snag these events as they take their  first uncertain self-conscious steps away from the realm of simulacra; we see complicit laughter in the oldest faces and in the youngest a delight in being out after dark and having the run of the place.
Things like that keep things like this happening.

Popular posts from this blog 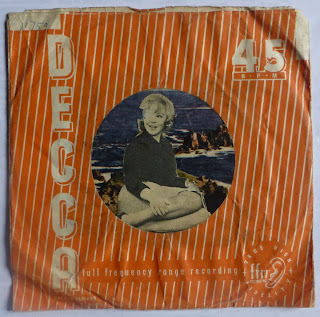 Home-made record sleeves.
This example comes from the early 60's. The teenage market is expanding; pop star life story mags are cheap and plentiful, encouraging identification with performers who increasingly share a background with their audiences. Pop ( we call it Pop by now ) is part of a rite; the big labels form a megalith within which we dance, fight and grope. Record packaging lags behind other commodities; Lps and Eps come in attractive sleeves, but 45's are plainly packaged; grey text on monochrome labels, the  green of the Columbia label had echoed the livery of corporation buses. Company sleeves are standardised and come in single colours, some have adverts on the back for the company catalogue, or for gramophones and hairdryers.
The Machineshop Overall Blue of the Decca label always looks capable of nullifying any colour in the recorded performance within, and the orange stripey sleeves have the utilitarian feel of a bag for woodscrews or rawl plugs, or a packet…
Read more

2 Human Organs and a Harmonica 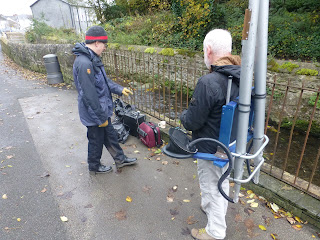 Their limited palette and the equally limited permutations thereof may characterise the Human Organs sound, but it isn't sacrosanct. Reeds, chanters, bellows and lungs are welcome to thread their melodies in and out of the soft pulses of the pipes. This winter will again see musician Mike Willoughby join them for Oss Night in Ulverston, with a new piece composed for the occasion to go along with the traditional Stretton Oss Song, and accompany the cries and pronouncements of the Ostler.

https://vimeo.com/371443632
Here 2 members of the band meet Mike on Gill Banks to explore the possibilities. Mike's Lydian modalities have felt out the shape of the space offered by the pipes, and a phrase is emerging, on which to hang a cats cradle of a tune, to which the Oss can dance.